Simone Reverie aka Valora Al Nahyan, like many of Second Life™ residents, started playing because she heard it from a friend's word of mouth. "I heard of SL from a friend on IMVU who goes by the name, Anshe Chung."
Reverie, who once played on IMVU™, another virtual reality game, mentioned to this same friend what she would like to see in virtual reality. Chung, according to Reverie, suggested she try playing Second Life as it seemed to cater what Reverie seemed to be asking for. Curious and interested, the latter soon created an account and was amazed in discovering SL™ Metaverse.

During her noob days, she became the wife of a wealthy man, but she quickly found out that relationships on SL don't last very long. She doesn't bother engaging on them anymore nowadays learning from experience. Reverie remembered she used to hang out at Tableau because that was the place to be seen when the "hipster crowd" ruled fashion. "I made a few dear friends. More enemies then friends, but people did know my name. A lot has changed since then. I was notorious as I am now, but the title of socialite came with far more respect. Now I see new people. They do interesting things, but I sit back unmasked, as I’ve done it all already," Reverie thoughtfully said.


Reverie recalled her Second Life history. Started at another previous account, she had a close friend, a store owner, who she was always seen with. Paris and Nicole, that was their moniker. Her friend was better-liked than Reverie was, though both were well-known. She remembered both of them usually have very nasty fights and that she could never seem to get herself to trust this friend, but somehow, they always seem to patch things up again. Despite their differences, Reverie shared that that friend was the only person she ever kept dear.

When prodded to tell more, Reverie obligingly responded, "One of my fondest memories while climbing to the top was when I sat front row at Paper Couture™. The store is big now, but wow back then wearing their clothes came with such status. I sat at a lot of shows. Met a lot of interesting people and that was what really what helped carry my name. I knew I had got to a point where I was content with my image when one of the Armidi™’s approached me at a party. I had no idea who this person was, but they spoke so vividly about me. I was so flattered. Soon after I took a hiatus. A long Hiatus and once I returned everything changed. I felt like Mr. Gekko in the sequel of Wall Street when he came out of jail with his old cell phone. I made a new name and a less pretentious image. I’ve grown a lot."

Reverie, who started SL on another name, said that she got the name "Simone" from a movie. She thought the name embodied the persona who fitted her. The main character in that movie was someone who existed in a virtual world that a lot of men looked for. Reverie mused on this and shared, "She was the perfect woman. Many males on female accounts who personify women have such desirable qualities. It makes men feel like they found the perfect match. It’s crazy because some of them fall in love. The irony of it all is people get wrapped up thinking perfection exist. Once you come to terms that perfection is solely about preference, then you can decipher what is too good to be true." Pretty soon though, she grew tired of the name, and decided to change her display name to "Valora Al Nahyan." According to her, the first name sounded alluring and the last name sounded Arabic. She thought Arabian names sound prestigious, and the combination of the two sounded privileged. "In way I am privileged. I don’t know what it’s like to struggle financially, but I’m sure one day I will. 99 percent of people do, even the wealthy." 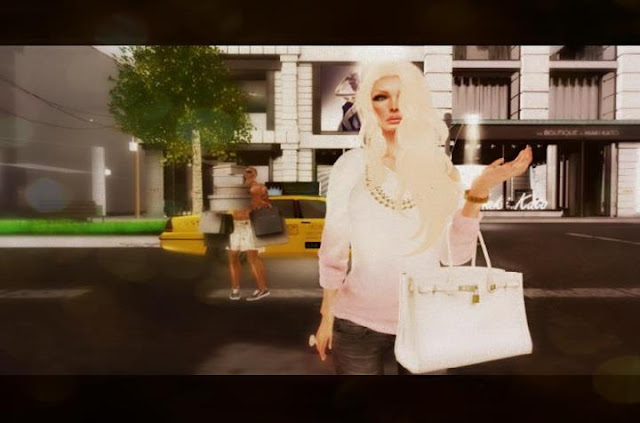 Reverie, who doesn't bother hiding the fact that she is male in RL in a female avatar, is an active member of the LGBT organization. "It wasn’t hard doing anything and being male on a female avatar. At times I do purposely hide the fact I am male to get some perks like free clothes from male designers. But for the most part I feel comfortable letting those around me know who I am. I have a very feminine voice, so at times people can be fooled even if it’s not my intention." She admits though that there were a lot of times that she was ridiculed and judged, being called a "tranny" with a negative connotation to it. Laughingly she added that the same people who calls her derogatory names are, in fact, closet homosexuals, as they hit on her afterward behind closed doors. "I had one incident with someone well known in the urban community who was insulting me. I have never met this person other than the run-in at the car store. They proceeded to call me fag on mic, and then spoke about how they were going to buy all the cars in the store, claiming he was rich. A month later he lost his sim for lack of payment and I later found out he was in the closet like Christian Louboutin’s."

Dabbling now into Second Life music, Reverie has been venturing into the world of rapping for quite some time now. She writes all of her own raps, explaining that the inspiration most probably came from her grittier and rougher side, although she has been also exploring how to express other sides of herself into her music as well. "Some people are made to create and others are better at embracing creativity. Ever since I could remember I loved fashion and music. I was so young when I first learned about couture. It was something I understood so quickly and wanted to learn more about."

A fashion enthusiast too, Reverie voiced out what she had to say about the fashion community. "I personally believe SL fashion is corrupt if you are not a designer. The entire industry is fixed as you can only prosper by whom you know whether than what you can do. Standing out only requires you to know of someone powerful who can get you seen. For myself I am lucky enough to be skillful in fashion. I have my own unique and individual style and I have been fortunate enough to run into a few people who have gotten me seen in the industry. I think if you really want to stand out you should be yourself. It sounds cheesy, but I personally would rather be hated for who I am, then loved for what I’m not." As for stores that she patronizes and styles she goes for, she added, "Normally I stay away from stores geared to the urban community because I find the quality to be very poor. I don’t think the urban community cant decipher fashion from 'flash’in',so I go for for stores which I can find staple pieces in. Pieces that I can mix and match. I like a variety when I shop because I have never been one to buy a fat-pack. I like to look as if I have a cornucopia of different garments and I in fact do. One of my favorite stores is, Shi™. I’ve spoken to the owner and she has a great understanding of fashion as well as amazing taste. Everything in her store makes an outfit complete."

When asked where she can usually be seen nowadays, Reverie answered, "Usually I’m shopping you can spot me if a hot new purse is released. I love purses. For the most part I’m everywhere. I just do not enjoy going to the fancy fashion events. The crowd is boring and pretentious without reason. Many of them pretend they know about fashion. I don’t have time for that shit. Usually the magazines throw those events, but don’t get me wrong. I love what some of the magazines are doing now. I like to be where the fun is, where I can meet interesting people from different walks of life." She also added that, at the present, what's been keeping her busy is spending lindens frivolously. A mesh line may also be in store for her in the future but she didn't want to say more about it, preferring to keep things hush-hush.

For parting advice, Reverie has this to say, "Well to those rapping in SL. Never feel like you need to stress yourself to produce anything. SL is one big sketch pad and if you put out something, play it back. If you don’t like the outcome. Simply start over, eventually you will be content. There are people who are willing to help you. Just check Second life Facebook™, they are there. For fashion enthusiast, make sure you link up with other people who share your love. That is a great way to bounce ideas back and forth and even create your own little circle. There are many fashion lovers here, all with different styles. I find it to be so eclectic. But when you think deeply about it they are all the same. Everyone has similar likes and dislikes. You will have no problem finding people you can relate to, they are all over Flickr™. If you really want to get ahead in anything here fast I would suggest working with someone who is established in the craft you enjoy. However, you need to know how to deal with people who have power over you. They can take it away instantly. As for being in the LGBT community my advice is please do not let the derogatory names people call you lower your self-esteem. These are people to be laughed at. The LGBT community is powerful here and you will run into some great people. That is a promise, but believe me that circle can get nasty. Do not let your guard down for one second. Once you are secure and ready for anything you will have so much fun that goes for both worlds."


TY for reading my interview of Simone Reverie aka Valora Al Nahyan , reporting for OI Magazine (On Innovation Magazine) my name is Luc Fray.
As always feel free to comment!

*Majority of the pictures of the client are borrowed from her Facebook profile*
Posted by Carmichael at 5:25 AM

On Innovation Magazine: Articles you will love to read!
We started since June 4th 2009 and are preparing for new articles in 2014!
We covered anything innovative from real life stories to virtual worlds!

Nothing is fiction, our articles are real events taken place in the real world and some also in virtual world online games such as Second Life™ and Inworldz™.
Our staff (writers, photographers, videographers) are also real people with most listed as their avatars (alter egos).

Our magazine is also known under its full name, On Innovation Magazine.
We always publish exclusive and original articles found nowhere else unless copied from our site with permission.

Here at our blog,we have published 67 blogged articles so far by 21 writers plus we have also published 4 online digital magazines viewable on www.issuu.com/kriscar .


We always thank you for your support over the years,please enjoy the articles.


Our complete staff of this blog with their past works, each with their own unique style of writing attracting a nice fanbase :